A large percentage of fights end up on the ground. By mastering Jiu Jitsu the ground becomes your domain. With a background of Jiu Jitsu in your martial arts arsenal you can use techniques to either prevent the fight from going to the floor or finishing it with a submission if it does

WHAT IS BRAZLIAN JIU JITSU?

Known as "The Gentle Art" Brazilian Jiu Jitsu is a form of submission grappling that encompasses a series of techniques designed to use the opponents body weight and energy against them. Even the smallest of practicioners can win against a bigger stronger oppponent if their technique is superior. 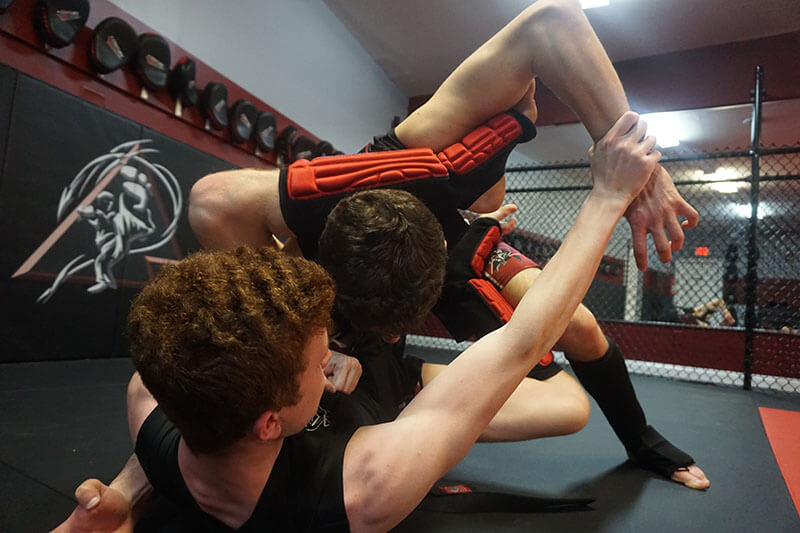 Traditional Jiu Jitsu is very focused on using the martial arts uniform known as a gi to manipulate your opponent. Our approach to Brazilian Jiu Jitsu focuses on realistic self-defense. Our unique submission grappling style relies on grips and control points for any situation, in any apparel, and accounts for various street scenarios.

Brazilian Jiu Jitsu techniques and principles are based on leverage and manipulating one’s body weight to sweep or submit your opponent. This allows for a smaller person to defeat an opponent much larger than them.

Most fights end up on the ground, regardless of your stand-up skills. That is why we combine our Jiu Jitsu techniques with modern wrestling; a solid wrestling background can prevent a fighter from ever being taken to the ground.

In tournament Jiu Jitsu, being on your back can be advantageous in certain situations. Tournaments are strictly positional and ground positions can give you leverage. In real time however, striking changes everything; the kicks and punches of the opponent you meet in the street makes getting off your back and onto your feet a top priority.

In a street fight, the goal is to end the fight as quickly as possible. You can’t stay on the ground with an opponent and grapple indefinitely, especially if multiple attackers are present. We use the highest percentage submissions as well as devastating striking from the Kempo system to end the fight in the most efficient and effective way available.

THE HISTORY OF BRAZILIAN JIU JITSU

The Jiu Jitsu story begins with a master of Judo named Mitsuyo Maeda. He was a martial arts prodigy who eventually became one of the greatest fighters in the history of Judo. Maeda was born and raised in Hirosaki, Japan where he trained in classical styles of Judo, eventually entering the Kodokan to study the art. The Kodokan is one of the most famous Judo academies—even to this day—and was founded by the system's master, Professor Jigoro Kano, who referred to his art as Kano Jiu Jitsu. The term Jiu Jitsu translates to the "gentle art."

One of Kano's top students and undefeated in Judo tournament competition, Maeda traveled to the United States in 1904 to spread the word about Kodokan Judo. Over the course of his career, Maeda fought in over 1,000 matches, grappling with and without the gi and fighting in "mixed" matches—commonly referred to as "no-holds-barred" fights that included striking and kicking. Maeda eventually retired undefeated after fighting in Great Britain, Europe, Cuba, Mexico—and finally Brazil. There, Maeda opened a Jiu Jitsu academy. The culmination of Maeda's training in classical Jiu Jitsu—and especially Judo—plus his extensive fighting against all types of challengers resulted in a realistic, street-effective fighting method.

One of Maeda's students, Carlos Gracie, opened his own academy in 1925 after studying with Maeda for several years and started the now famous "Gracie Challenge" with his brothers. All challengers were welcome to come and contend against the Gracie fighters in no-holds-barred matches, but the brothers were repetitively victorious against fighters hailing from all different backgrounds. They continued to develop the strategies and techniques they learned from Maeda, honing their skills with the ideals of realistic fighting.

The overall fighting strategy of Brazilian Jiu Jitsu is designed to equip a physically smaller or weaker individual with an effective method of defending against a larger and stronger attacker. When applying Brazilian Jiu Jitsu techniques, leverage is paramount because it's the secret to the amplification and most efficient use of force. The style also has the most developed methods of fighting while on your back—a position weaker fighters will often find themselves when attacked.

In the late 1980s, several members of the Gracie clan immigrated to the United States. Brazilian Jiu Jitsu became world famous in the mid-1990s when Royce Gracie racked up a string of victories in the early Ultimate Fighting Championship (UFC) competitions, an event pitting martial artists and fighters of various disciplines against each other in "no-holds-barred" rounds. Just a short time after, Royce's brother, Rickson, went undefeated in similar tournaments in Japan, and other members of the Gracie clan were equally successful in Mixed Martial Arts events around the United States. It became quickly apparent that fighters versed only in punching and kicking lost every time they faced an opponent trained in Brazilian Jiu Jitsu.

The innovations of the Gracie family—most notably by grandmasters Carlos and Helio Gracie—are continually evolving and being refined by fighters today, resulting in a unique style of Jiu Jitsu.