Kempo is one of the original mixed martial arts combining aspects from a multitude of striking styles into one to find the most efficient way to deal with an opponent. The strikes are lightning fast and to the most vulnerable parts of the body in rapid succession.

THE BENEFITS OF KEMPO

There is no sport that trains the body and mind quite like martial arts does. Many popular documentaries, including National Geographic’s “Fight Science,” illustrate how ordinary people transform their bodies into powerful fighting machines, and accomplish intense feats of physical and mental determination. These accomplished masters, like every new student of martial arts began their studies at a dojo. Training in Kempo at Alchemy will offer you: 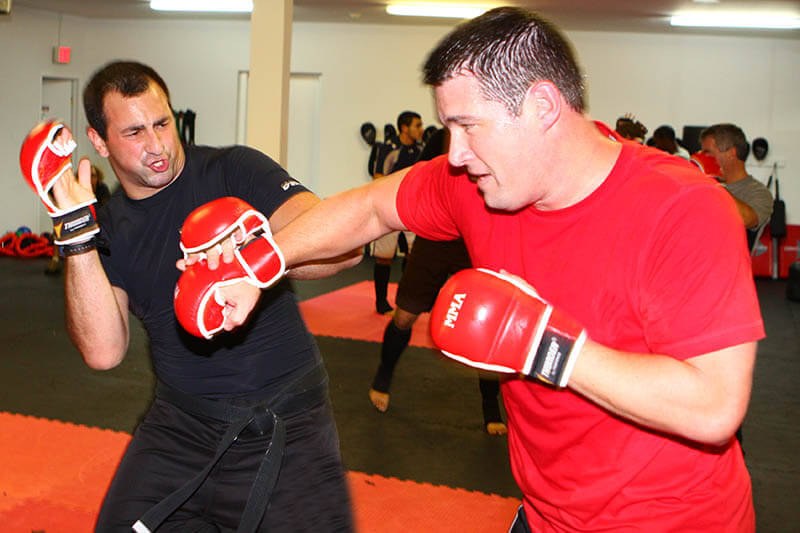 Kempo has earned its title in the octagon as one of the leading standup martial art style thanks to UFC hall of famer, Chuck Lidell. It is a very fast paced striking style that uses efficient strikes to multiple vital areas of the body in rapid succession to incapacitate its opponents. Kempo is unique in its belief that every part of the body can be used as a weapon whether it be fists, palm, elbow, forearm, knees, shins, fingers or even your own head. Kempo is a brutal martial art that turns the entire body into a weapon, making it a highly used self-defense system by military and police agencies today.

Alchemy instructors were able to recognize that each fighting style offered something unique, and that with every benefit there were weaknesses that made a fighter vulnerable: no style was exempt. After studying and mastering many different martial arts, the conclusion was that there really were only four ways of fighting:

fIGHT WITH YOUR HANDS

Punching and striking with an open or closed hand—and using your entire arm, like your elbows and forearms. This incorporated skills from Kempo, Karate and Western Boxing.

From your feet and knees to shins and thighs. These skills originated from the Kempo system as well as pulled from Muay Thai Kickboxing and Karate. Leg strikes are some of the most effective strikes a fighter can throw, whether it's knee strikes or a powerful roundhouse kick adding these to your arsenal can make you a tough opponent to beat.

Knock your opponent off his feet by throwing, tripping, pulling, pushing, shoving or scooping him—our system uses takedowns derived from wrestling, Judo and Brazilian Jiu Jitsu. If you ever feel overwhelmed on your feet Kempo provides ways to bring the fight down to the ground for a quick finish.

Once your opponent is on the ground, grapple by either wrestling or holding, or by breaking and locking bones or joints against nerve centers—our unique style of submission grappling, comes from a deep understanding of no gi Brazilian Jiu Jitsu

Alchemy instructors understood that the ultimate in self-defense lay not in one way or style of fighting. By combining the "Four Ways of Fighting," we devised and developed ways to integrate diverse methods of fighting into one.

THE HISTORY OF KEMPO

It was the dawn of the 20th century. Hundreds of immigrants hailing from the Orient and the Pacific—from China to Japan to the Philippines—migrated to the Hawaiian Islands, bringing with them countless styles of martial arts. Their varied techniques and cultural backgrounds blended together, transforming the islands into the martial arts capital of the era.

In 1916 at the age of four, a young Hawaiian, James Mitose traveled to Kyushu, Japan to learn the ancient family art of Kosho Ryu Kempo. After years of rigorous training, the 20-year-old Mitose returned home to Hawaii, bringing his newfound knowledge to share with the community. Finally in 1942, he opened his own Self Defense Club and began spreading the wisdom of Kempo with the public.

Very few students mastered Mitose's demanding style. One of the few who did was the legendary William Kwai Sun Chow: one of only six students to ever earn his black belt under Mitose. Together, the two men began to expand on the system. To differentiate a war art like Kempo, they introduced black gi’s into the higher ranks; while those who practiced the increasingly popular and sport-oriented karate, continued to wear white gi’s.

At the time, popular culture still upheld more traditional, “pure” styles, and did not embrace the fusion of styles that Kempo provided. In spite of initial resistance, Kempo continued to evolve through embracing and incorporating fighting principles from many different arts. Mitose’s original Mixed Martial Art, the style that would later earn him fame, was ahead of the times. Through their work, Mitose and Chow planted the roots for a martial arts system that incorporated all ways of fighting into one single style.